The Guru Way: Becoming Nobody

Everyone’s busy being somebody. – Ram Dass

We are proud to support the Love Serve Remember (Ram Dass’) Foundation (LSRF) and the Be Here Now Network. Not only through our Founder and CEO Gagan (Jared Levy)’s guidance as a member of the foundation’s Board of Directors, but because of the foundation’s mission to preserve and continue the loving teachings of Neem Karoli Baba and Ram Dass through online courses, blog content, films, podcasts, vast social network channels and collaborative projects with conscious artists and musicians.

Guru’s most recent opportunity to show our love for the Love Serve Remember Foundation—this time, in partnership with Google Empathy Labs—has been through the marketing and promotion of the soon-to-be-released documentary, Becoming Nobody, directed by Jamie Catto, produced by Raghu Markus and starring none other than Ram Dass (with Jamie Catto).

The intent behind the film is to introduce people to Ram Dass’ life and his teachings, and in particular Dass’ philosophy on, “…what I call ‘somebody training,'” Dass says in the opening voiceover of the trailer.

The Becoming Nobody website goes on to explain, “We come to understand how our old roles and disguises become increasingly burdensome. The film captures a loving man full of joy, wit, honesty and wisdom, at ease in conversation while sharing his considerable pains and pleasures. The life experiences that have freed him from the attachments of his ‘somebody-ness’ have transformed him into the radiant soul who now inspires a new generation.” 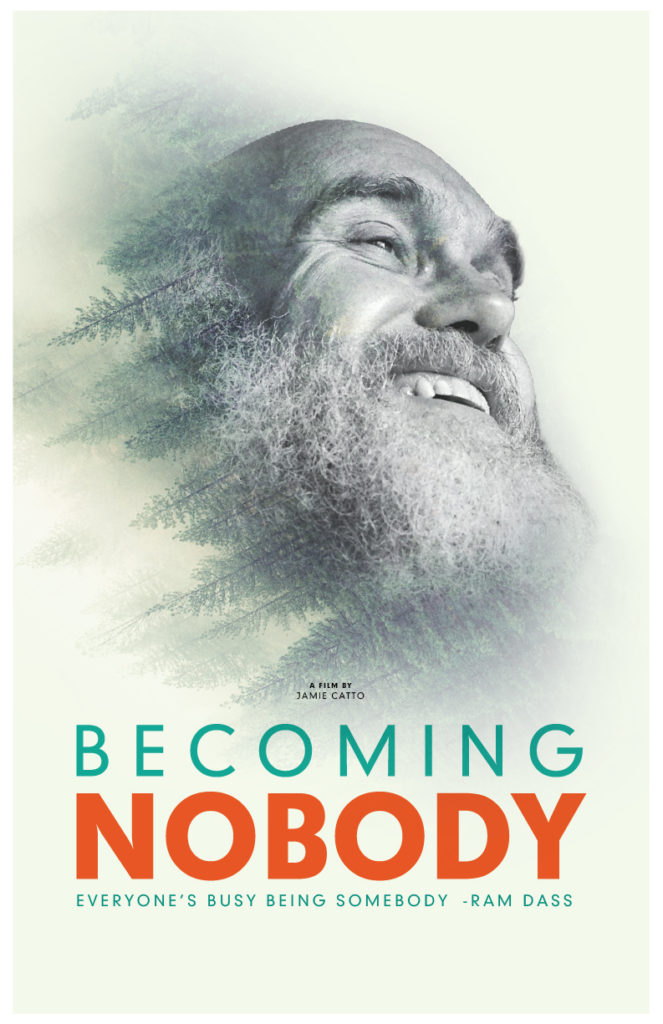 With this inspiration in our hearts, the Guru Crew set out to develop the marketing and promotional strategy, as well as the art direction for promotional materials that would not only spark interest in the film, but catapult viewers’ interest and involvement in the Love Serve Remember Foundation to continue their learnings from Ram Dass.

“Ram Dass is one of the greatest wisdom teachers of our time and this film is an artistic homage to his impact, teachings and legacy,” said Gagan, who led the creative team behind this work. He continued, “The core theme is about rethinking our conditioned paths or our grasping to become ‘somebody’ and seeing the potential deeper happiness and contentment in ‘becoming nobody.’ We wanted to bring this theme to life with artistic funk and reintroduce the world to Ram Dass’ face, teachings and love. And the inspiration to include the trees came from the following insightful quote, which certainly plays out in the film!”

The minute you get near humans, you lose all that, and you’re constantly saying, “You’re too this,” or “I’m too this,” or – that judging mind comes in. And so I practice turning people into trees, which means appreciating them just the way they are.” – Ram Dass

As Dass ages, he remains the most important spiritual teacher in the West. This film will pull viewers into the humor and lightheartedness of the real Ram Dass as he clowns around with his unique, no-big-deal approach to life.

In an age of spiritual bypass and fleeting spiritual truisms, we believe that Becoming Nobody will allow others to discover and ground themselves in the “basics” of the timeless wisdom of Ram Dass.

Spirituality isn’t about identity. ‘Become nobody’ and recommit to an authentic spiritual practice through the West’s greatest example—and the OG—of a life dedicated to awakening.

Becoming Nobody opens on September 6, 2019. Click here to find the location nearest you.